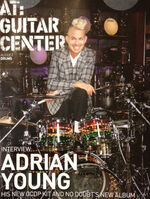 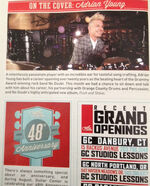 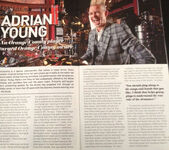 Musicianship is a special characteristic that comes in many forms. Every successful musician brings her own unique set of skills to the table – be it natural talent, formal training, technique, live performance – the list goes on. For Adrian Young, there’s one thing he has unabashedly offered to his fellow bandmates and countless fans over the years: heart. Primarily self-taught, Adrian’s unrelenting passion for the drums has propelled him through an incredible career of more than 20 years with the Grammy Award-winning rock band, No Doubt.

“I always wanted to play the drums, ever since I was really little,” says Young, spending his evening at Guitar Center Block at Orange, in Orange County, CA. “I was always paying attention to the drummers, listening to the drums on my cassettes. I just wanted to play so bad, but I could never afford a drum set. My parents finally bought me one when I was 18 years old – a senior in high school.” Young’s determination compelled him to hit the ground running – or hit the kit drumming – and start honing his natural talent for percussion. “I just went for it. Every time I thought about or attempted to pick up another instrument, immediately thought, ‘I should just get better at the drums.’”

After playing his newly acquired drum kit for only a year, Young unknowingly got the opportunity of a lifetime – an audition for an Anaheim band called No Doubt. “I didn’t really know the band at the time – my friends and I would go to their shows in high school before I had even started playing. The band started in 1987 – I joined in ’89,” he says. “I had a demo tape of theirs, because they didn’t have any records at that time, and I practiced everyday to that thing. I knew that the demo tape like my life depended on it. I really, really knew it well, so when I auditioned, I said I had been playing for years – I definitely fooled them.” Upon securing his spot on No Doubt’s roster, Young’s excitement was somewhat short-lived, as his nerves about his own inexperience set it. “I was very nervous. I had a lot to learn because the other guys in the band were pretty good musicians already. Tom was taking theory in college and Tony had played in the jazz band – I was just kind of hacking through with a lot of spirit,” he laughs. “So it took me a good two or three years to catch up, to where my chops were on the same playing field.”

As a musician who has worked so hard on his own to be become successful, Young definitely thinks that drive and tenacity play just as an important part as formal training. “I think there are pros and cons to both sides,” says Young. “I’m not the authority on formal training, but I’ve seen a lot of really technically great drummers that kick ass, and have a lot of tricks up their sleeve, and frankly, can do a lot of things that I can’t do – but I’ve also seen those same guys not able to really hear the song, and make the song sound fantastic.” One of Young’s consistent goals in his playing is to serve the music, rather than his own desire to show off. “I often criticize myself for over-playing. With No Doubt, we’re all over the place stylistically, on every one of our records, and so some songs – like the song “Hella Good”, for example – it doesn’t call for anything more than that simple, straightforward 2/4 funk beat. But there’s other songs where I’ve taken liberties and been a bit more explorative with my playing,” he says.

“Truthfully, I tend to over-play – or should I say – open it up more live, way more than I do on the records. I think that’s probably the case for a lot of people. I probably play ten times the amount of fills per song live than on any song in the studio,” he jokes.

To avoid the common drummer’s trap of overplaying, Young has a bit of advice to offer from two decades on stage and in the studio. “Just play to a lot of CDs – well, I guess it’s not CDs anymore,” he laughs, “but you should play along to the songs and bands that you like. I think that helps young players understand the true role of the drummer – when they’re not soloing.” Often some of the best experiences Young has had as a player are the times when he’s asked to play something totally outside of the box. “One of the things I found that made me better was inserting myself into situations where I wasn’t comfortable. Whether its getting a call to play on some unknown artist’s record, or getting a call to sub for three Maroon 5 shows on a day’s notice – if I can step up to the plate when I’m out of my comfort zone, that will improve my skills for when I’m back in my comfort zone.”

The comfort zone Young’s referring to is of course No Doubt, a dominating rock band that grew out of it’s member’s pure love of music, and their commitment to constant hard word and self-scrutiny. “If you want to play music, do it because you love it,” Young urges. “That was always our motto in No Doubt. We never had delusions of grandeur, or thought we were gonna be huge – it didn’t seem like that was within our reach. We just love being in our band,” he says. “Our goal in the early days was to be really, really tight and always get better at our instruments. We were never really fully satisfied being as good as we are – or were – at any point. We’d play with other bands that had amazing musicians that were far ahead of us, and we’d go, ‘We need to get that good – or at least strive to.’” This constant desire to better themselves has led No Doubt on a career path with a groundbreaking style that refuses to be categorized. According to Young, No Doubt’s new album Push and Shove, available Sept. 25, continues that tradition. “The new album definitely sounds like No Doubt 2012. There’s a few songs that are ska – but it doesn’t sound like 1992 ska – we’re going back to our roots a little bit, but it’s also very modern,” says Young. “Stylistically it’s very diverse, just like our other records – there’s some new wave stuff, dance stuff, a couple of ballads – it’s all over the place.”

In addition to his incredible body of work with No Doubt and numerous other projects throughout the years, Young has had the privilege of sharing ownership of Orange County Drums and Percussion for the past sixteen years. “In 1993, I was approached by Daniel Jensen who was one of the owners at the time, and he said, ‘I wanna build you a snare drum,’ because it was hard for me to afford any drums at that point in No Doubt’s career,” says Young. “He built me a 12×7 snare – I still play it – and over time, we became friends. We started a relationship, then they built me an entire kit, and we decided shortly thereafter that I would partner up with them – that was in 1996.” As co-owner of OCDP, Young has also been part of Guitar Center’s Drum-Off for several years, serving not only as a sponsor, but also a performer and a judge. “It’s kind of like a ‘drums forever’ party,” he laughs. “You get to drink beer and be a drum geek for a night – plus you get to see some monster players. Every time I go to the Drum-Off, I think, I gotta go practice a little bit more.’” In fact, Guitar Center’s Drum-Off featured the one and only drum solo Young has ever performed. “When I got the call, at first I said, “I’m not gonna do it. I don’t solo – I don’t think like that’”, says Young. “And then I talked to my wife, Nina, and she said, “Don’t be such a wuss!’ So I called Guitar Center back and said, “Alright, I’ll do it,’” he laughs. “The benefit was that I really, really practiced hard, expanded my playing, and I found afterwards I had really improved.”

Young famously proposed to his wife on stage at The Fillmore in front of more than a thousand fans. “Everyone was onboard for it, our families were there – she thought they were just there for the show. She even commented, ‘Why do we have so many out-of-town friends at this gig?’ I said, ‘I don’t know, isn’t it cool?’” he laughs. “Gwen made sure Nina was backstage, helping her with her battery pack for her in-ears – some made-up reason – then, I invited her our on the stage, and I got down on one knee – in my underwear,” he recalls. “It was really cool, really intense.” Now a husband and a father, Young’s 10-year old son is showing signs of musicianship. “We left it up to him. We just said, “You have to do something – you can’t play video games every day.’ And now he’s really into art and music.”

Throughout his extensive musical career, Young has managed to maintain his own unique voice in the drumming community, though admittedly, he himself tried to emulate his drum idols. “You know, when I was a kid, I tried to sound like Fish from Fishbone and Stewart Copeland from The Police, and a slew of other guys. But what I’ve come to find, is that I never did,” he says. “And I think that’s probably the same for everybody. So, I think it you want to try and emulate something, it’s a good exercise. But ultimately, you’re gonna sound like you – whatever that ends up being.”