Nodoubtpushandshove Wiki
Register
Don't have an account?
Sign In
Advertisement
in: No Doubt, Interviews, Articles,
and 5 more

Edit
watch 01:36
We're Getting Mutants in the MCU - The Loop
Do you like this video?
Play Sound 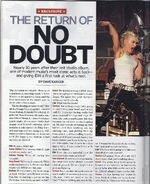 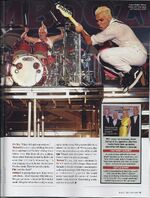 The Return of No Doubt

Nearly 10 years after their last studio album, one of the modern music’s most iconic acts is back — and giving EW a first look at what’s next.

The ivitation was cryptic: Show up at a nondescript recording studio in Santa Monica at an appointed hour, and the four members of No Doubt will be there, with news to share.

Was it a breakup annoucement? After all, the Orange County quartet — vocalist Gwen Stefani, 41; bassist Tony Kanal, 40; guitarist Tom Dumont, 43; and drummer Adrian Young, 41 — haven’t released a new studio album since 2001′s Rock Steady. And Stefani’s calendar, which includes a solo career, clothing lines, and marriage and two young sons with musician Gavin Rossdale, 45, is packed solid. But happily, no; read on to find out what we learned.

Gwen Stefani Um, we are… what if I said something really bad?

Tony Kanal We’ve made a record. We’re really excited about it. We’re in the final stages now. It’ll be out this year.

Stefani We only have a few more songs to finish. It’s been a really long process. Fun, but it’s starting to get not as fun. We’re like, “Let’s hurry up and finish it!”

Kanal We started writing in 2008, when Gwen was pregnant with [second son] Zuma. We spent the year trying to write, and we hit a block.

EW What was the block?

Stefani Not writing songs. Like, going in and hitting your head against the wall for hours and feeling really bad about yourself for days and days. We definitely took a snail’s pace, but only because we have so much going on. My day consists of waking up with my babies, and then working out, my clothing lines, and picking them up from school, and then rolling into the studio at 4:30 and you only have a few hours before you have to be up with the kids again. And I can’t do it five days a week. I have to be home with them for dinner.

EW Does the new material have the same punk-ska sound as before?

Stefani Don’t you feel like we listen to so much stuff that we love and we’re like, “Oh man, I wish we could be like the Cure!”? But everything only sounds like us. I wanna be Depeche Mode so bad, but I just don’t sound like them.

EW What’s rock life going to be like that all of you are over 40?

Stefani [Deadpan] None of us are 40, I don’t know what you’re talking about.

Kanal The great thing that’s going to happen on our next tour is that there’s going to be nine kids on the road with us. Adrian’s about to have another kid.

Young It’s like having two seperate lives. Each of us have our family-home-surburban life. Then once we’re on stage, it’s like, “Okay, let’s get our rock on.”

Stefani It’s such a natural thing for us to be in our band; we’ve been doing it our whole lives. But then all of a sudden, these other humans joined in, little tiny ones that are really demanding. It’s challenging, especially for me because I’m the mom. They’re just the dads.

Stefani I’m saying they have their wives with them. I don’t have my wife with me. But you get to see a lot more. Normally, I would sleep the whole tour and just wake up to do the show. But you take [the kids] places on days off. We’ve seen, like, every muesum in the every city of the world.

EW What’s new with your solo career, Gwen? Are you also recording?

Stefani No, no, that was a moment in time. It went on a little longer than we all thought it would, because I was inspired and you have to go with wherever you’re at in that time in your life. We would have never have made this record if I hadn’t made those records. Everything works out how it should.

With some nervousness, Gwen Stefani & Co. agreed to play two tracks from their upcoming record for EW. Here’s a preview:

“Settle Down” Under a dancehall beat (think the band’s 2001 smash “Hey Baby”), Stefani sings about trying to balance all aspects of her busy life. “I’m-a rough and tough / Nothin’s gonna knock this girl down.”