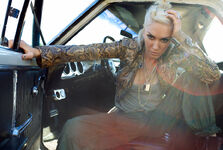 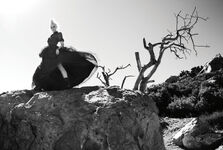 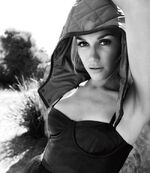 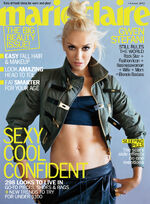 It’s a steamy 80 degrees in West Hollywood, but Gwen Stefani rolls into the Soho House rocking a pink leather jacket and looking fresh as a flower as she sails up the baby-grand staircase with a familiar ease. Her family enjoys the occasional bite here—there’s a playroom adjacent to the dining room, and Stefani’s two boys, Hollywood’s most famous junior hipsters Kingston and Zuma, run riot there in between bites. Closer up, she’s a bit wobbly in her Jimmy Choos (all these years later and Stefani still struggles with stilettos) as she makes her way over to a sofa by a window overlooking the Sunset Strip, where, even as the 20-something front woman of No Doubt, she was “never allowed to come” by her overprotective parents.

Stefani slips off the jacket to reveal a black tee with its sleeves rolled up to the shoulders. The look is satisfyingly strong. She’s still blonde-blonde-blonde, of course, scarlet-lipped and sleek-hipped, and with the checkerboard Rude Girl stick-on nails (“It’s a new technology—there’s no smell, no mess, no drying”), the look harkens back to the belly-baring boho Betty Grable that everyone remembers from No Doubt’s early days: always appealing, never tawdry, fists up and feisty. The contrasts between how she lives now and her middle-class upbringing in Anaheim, some 30 miles south of Los Angeles, have never been lost on Stefani, now 42. Even after all these years in the spotlight, the platinum records and magazine covers, she still talks with the wide-eyed incredulity of a newly minted pop star. “I’m just an Orange County girl/living in an extraordinary world” is how she put it on her 2006 solo album, The Sweet Escape; today she whispers, “That someone let me in this place is crazy.”

And now, after a decade-long hiatus from No Doubt, during which Stefani notched a formidable solo career and parlayed her daring style into a fashion empire, not to mention the marriage to Bush lead singer Gavin Rossdale and the children who followed, Stefani has reunited with the band for Push And Shove, what she calls “my favorite record. I mean, your favorite record is always the last one you did, but it really is—it’s a really great record.”

Stefani wrote many of the lyrics with longtime pal and ex-boyfriend Tony Kanal, No Doubt’s bass player; nearly two decades ago, their breakup would uncork her creativity. Now with their friendship on solid ground, they again find themselves on the same page, especially with Kanal a new father. “There are a lot of feelings of being overworked, overwhelmed: ‘Can’t we just slow this down? I can’t enjoy everything because I’m doing too many things.’”

The guys in the band, Stefani says, “they all have kids and they all get it”—the demanding tour schedules that keep them from home, the constant push-pull of never wanting to disappoint. The last few years have been particularly grueling. “I was definitely swimming upstream,” she says, “trying to balance everything that’s been going on with having kids and a family. There’s no way to do all these things.”

All working moms have battle scars from their barely survived days. Stefani earned hers during the making of Push And Shove. “I would be up all night because my second baby [Zuma, now 4] didn’t sleep, and he had a lot of ear infections. Then I’d wake up in the morning and do my workout, which I always felt I had to do, and then meetings for my three clothing lines, and then hang out with my kids, take them to preschool, da-da-da. And then at 4 o’clock, I’d be like, ‘All right, I’m out of here, I’m going to go to the studio’ and try to write a record. Sit on the couch [with my bandmates] and be like, ‘Let’s do this now because I’m missing time with the kids; I could be having dinner with them and putting them to bed.’ It was really hard.”

There’s no hint of complaining here. For Stefani, it’s a simple litany of what she sees as obligations she wouldn’t even consider dispatching to assistants. If anything, her words echo the chorus of so many working parents of young children: There aren’t enough hours in the day.

“Every day I fail at something,” she laments. “Every day someone is suffering because I’m doing all these things.”

So she’s downsized a little. Had to. “I’ve got myself in a lot of trouble by not saying no.” The solo career? Buh-bye. Her weight? She’s got a new approach: “This last year I kind of stopped working out. I think my body just needed a break. And so I did that, and focused more on feeling good as opposed to beating myself up.” She’s even eased up her efforts on her L.A.M.B. (Love, Angel, Music, Baby) fashion line. “I have learned to delegate. It still looks awesome, but did I pick out the buttons? No, I didn’t. I missed the last two Fashion Weeks because they were when school started; I can’t miss the first week of kindergarten.”

For years Stefani says she yearned to be a mother. Now she’s got the challenge of rearing two high-energy boys just a few years apart in age. “From the moment they wake up”, she says dryly, “they start beating on each other. I never knew they would be so physical. They’re just starting to play real well together, but with a lot of fighting. They do look out for each other – especially the little one, he really loves his older brother.

September marked a decade since Stefani and Rossdale wed. Their union is ancient by Hollywood standards, though they’ve weathered their share of tabloid scandals: a blood test confirming that in the late 80s-well before Stefani entered the picture-Rossdale fathered Daisy Lowe, now a model/actress; the persistant rumors of infidelity and fighting. When asked what their landmark anniversary represents to her, Stefani’s answer is immediate: “A miracle”. After all she’s done, “my biggest accomplishment is my marriage so far. Because it’s hard, everyone knows it’s hard. [Marriage] is something that I always wanted to do successfully. It was a dream of mine. I like the official-ness and the family-ness of it all, having the same name and making decisions together.”

Their relationship is better than it’s ever been. Like, we’re learning about each other all the time. He’s an amazing dad, he works so hard – I can hear him writing songs through the wall, and it is at a much quicker pace than me! He balances me out. And he – he never stops liking me, which is awesome! It makes me feel happy, that someone likes me as much as he does.”

I mention that I spent part of the last night of 1999 with Rossdale, on a platform high above delirious revelers in Times Sqaure for MTV’s end-of-the-century show. “Oh, don’t, dude”, she says. “We picked the hardest song in the world to sing.”

It’s true: as the clock struck midnight, No Doubt launched into a version of R.E.M.’s wordy “It’s the End of the World As We Know It”. Making matters worse, Stefani was wearing braces on her teeth at the time. “My lips were getting caught”, she says. “And I couldn’t do it, and then I was, like, so embarrassed.” So she locked herself in a closet crying until her then-boyfriend came to her aid. “He was like, ‘don’t worry, nobody was watching you – they’re all making out.’”

The sunny Stefani is not one to dwell on keen disappointments, but her tome changes when discussing the possibility of a third child. “I really, really, really wanted one about two years ago”, she says quietly. “And it didn’t really work out. So… I feel good with what we’ve got. Everything works out how it should. You can’t plan anything, right? You can try.” Even before she started a family, before the opportunities that success has brought and the spirit of gratitude that wreathes her still, Stefani had already learned a key lesson: the life-transforming power of telling your own story. “I can remember my dad listening to [my songs] on the way to work. One day he called me: ‘OK,this is really good. Don’t change anything you’re doing, and just keep doing what you’re doing.’

“And it felt really good because before that I was…” She chuckles. “Just a girl. I was just a girl who was just in love with her boyfriend. I was so passive. Then I wrote these songs, and it was like, ‘Oh, my gosh, this is passion, this is power. This is defining me.”