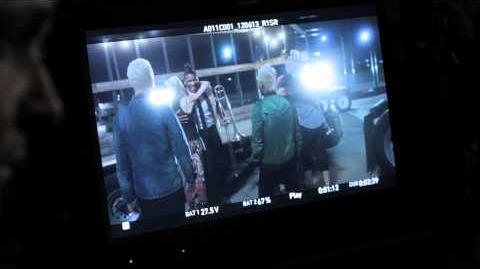 In the second part of the band's exclusive look at the making of the "Settle Down" video, fans were treated to more footage of the second day of shooting.

Gwen is seen filming a segment in the back of a truck filled with dancers, smoke and sweat. She comments on how she felt this part of the video is more reflective of the song due to the energy.

The band also filmed a narrative scene where they all come together out of their trucks to meet up.

Later in the shoot, the whole production crew was moved outside to film some live performances of the band onstage as well as a "country line dance" as Tony calls it. He picked up on some country twang during the lyric "trying to get a hold on this" and suggested this to director Sophie Muller. Next thing they knew, rasta-line dancing was introduced to the killer video. No Doubt is also seen jamming out, skanking and dancing with extras in front of the stage during one point.